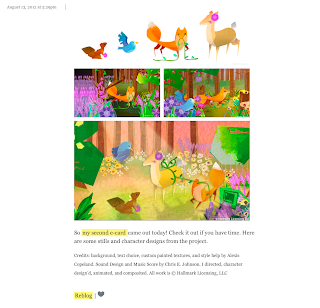 Hey All! Things are quiet here because I recently moved to Tumblr. I like the interface a ton more and I find it easier to upload my images and animated GIFs in an aesthetically-pleasing manner. I get my posting done in half the time I get it done here on Blogger. The only thing I miss is the ability to comment without "reblogging"!

Would some of you prefer I try to find a way to cross-post here on Blogger, or have you made the switch too? You can visit me at:

http://titosjams.tumblr.com
Posted by Tracy "Tito" Lynn MacLauchlan at 10:51 AM No comments:

They Think I'm An Automaton 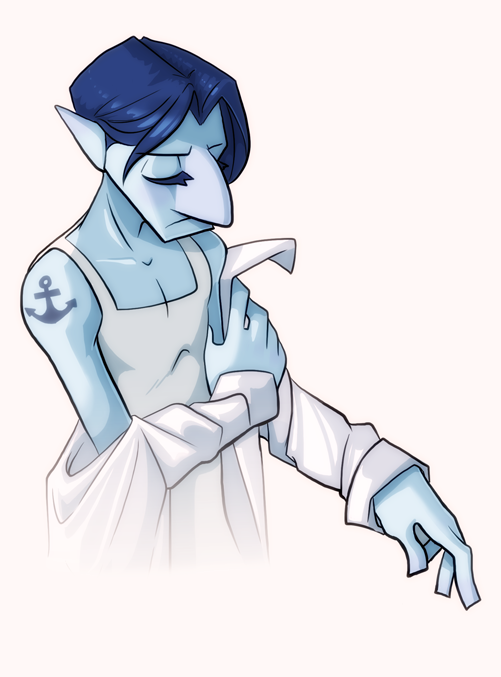 They Think I'm an Automaton

Veil from my project, The Taffetas, sporting a hypothetical tat. The idea is that it would symbolize there is more to him than you expect, but he hides it a lot. The image itself was also just something I dabbled with whenever I had the five minutes to spare, purely for joy and relaxation.

Speaking of Taffetas, we have a new update on our to-do list for concept art. Awesome! We're also on the lookout for background artists who would be interested to collaborate with us, as well as your opinions on which episode(s) you would most like to see mock screenshot(s) of.

Posted by Tracy "Tito" Lynn MacLauchlan at 12:40 PM No comments:

As promised, every other Sunday I'll be posting a new blog entry- showcasing some of my work, sketches, insights, and a tutorial or two.

Today, I'm doing a little catch up and showing off what I contributed for Dana Corrigan's 2010 senior thesis, a trailer for her project, Fate Saga.

Dana was my roommate in college, and since I am a bit of a cartoon and anime nerd, I was excited for the premise. I did the color design for her film, some matte painting, and of course, animation.

I got to animate shots of Cyrus, the villain of the short/trailer, who is a manic, scythe-weilding fire mage.

It was a lot of fun!

I did everything from thumbnails to rough animation by hand using a cintiq. As always, I referenced a video recording of myself to study the motion and acting. I even made a double-bladed scythe by taping cardboard 'blades' to the base of a broom (my dad later found these videos of myself and laughed his ass off for about two hours).

Clean up was by Dana Corrigan herself (she also animated the first shot to the scene on the left- I always keep it in because my shots after don't make much sense without it), colors by Jay Miller, and fire effects by Zelda Vinciguerra.

All in all, these were a blast to draw, especially the smears: 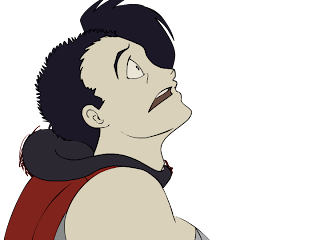 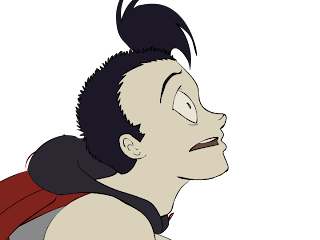 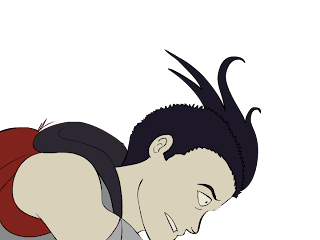 Posted by Tracy "Tito" Lynn MacLauchlan at 12:00 AM No comments:

Yes, it has been another month since I updated this blog! Eesh!

I enjoy updating my blog, so I'm going to start a more consistent update schedule. After this post, I will post another post next Sunday, and from there on out I will be updating every other Sunday with sketches, drawing, artwork, animation, tutorials and hopefully insights into my professional work as well, now that some are starting to go public. 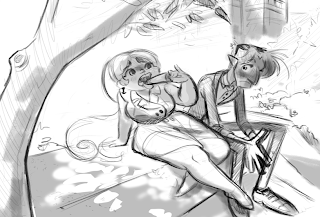 Co-creator Yesenia and I are hard at work on our proposed animated series, The Taffetas. In the past month and a half, we finished our episode synopsis, character bios, setting description, and today I'm happy to announce that we finally finished all of the writing for our pitch (the last bit of which goes live  on the blog Wednesday, July 4th, for critique). Our upcoming job is now the artwork! I'll be hitting the character designs, mock screenshots, illustrations, etc. as hard as I can. Up until this point, I've been leisurely sketching between all the writing and brainstorming. 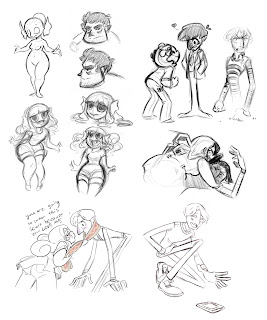 L: During an informal brainstorm for season 2 episodes, Jess and I came up with an idea where Gemini gets her and her boyfriend turned into kids again (Gem maybe ~11 and Veil ~13). more information on my deviantart upload. 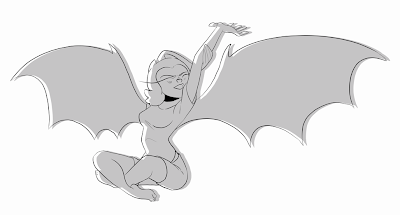 Sapphire is the main character's best friend (and sometimes worst enemy) from my animation series project, The Taffetas. She's a young, confident gargoyless who acts as a love guru, even though she can't hold down a half-decent relationship herself. 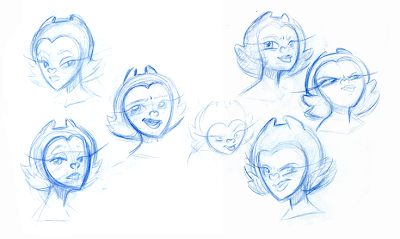 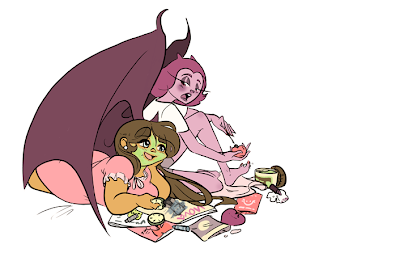 I draw her a little too 'cute' at times and I have a lot to experiment with, but I'll continue to explore through drawing and get it finalized. Since co-creator Yesenia and I are almost done with the writing for our pitch book for Taffetas (which concludes all of the character/story revisions for our proposed show),  I'm gearing up to produce polished concept art for our presentation material.  It's pretty exciting! 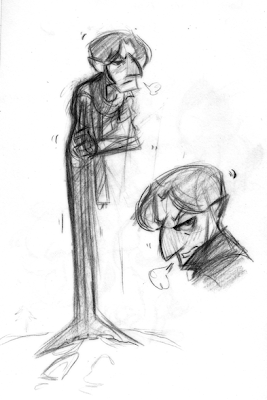 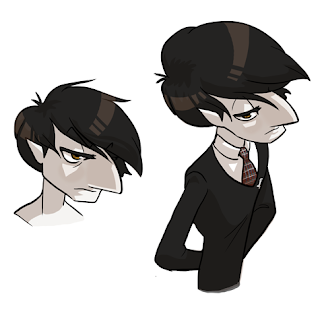 Things at work and at home are hectic, and I find it difficult to find time to update this blog. However, I still draw every day!  Today I'm showing off some work I did for (or inspired by) my and Yesenia Carrero's animated series pitch project, The Taffetas. 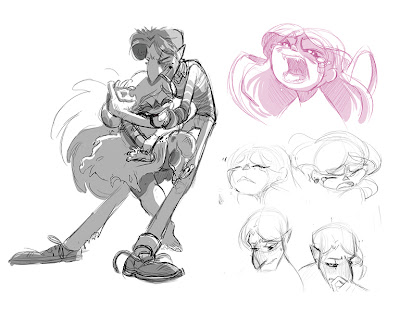 Right now I sketch just for fun for the project since we're not in concept art, but I'm always happy that these doodles double as exploratory sketches or decoration for our blog post . I enjoy how they help our readers connect with the characters in a way words can't. 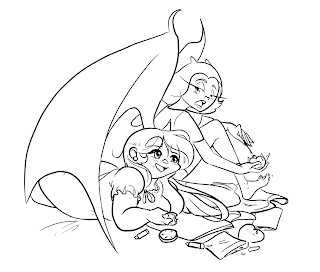 As far as the project itself, Yesenia and I recently released our first public draft of The Season 01 Episode Synopsis.

The synopsis marks the tail end of all the research and story revisions we did these past months. I think the story we want to tell is a lot stronger and closer to our hearts now than it was when it first started. I'm excited to wrap up all the revisions soon and start concept art!
Posted by Tracy "Tito" Lynn MacLauchlan at 8:19 PM No comments: 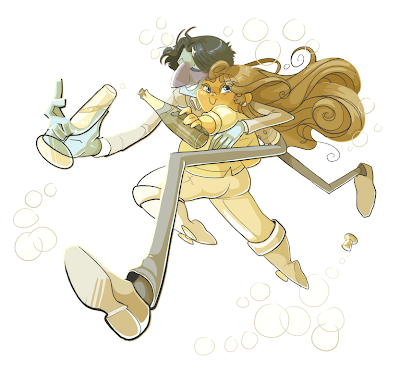 Made in celebration of The Taffetas' Facebook Fan Page update! Yesenia and I (mostly Yesenia) worked hard in our free time to see this to completion. The work included completely new art, writing, and a whole mess of coding and design work. Check out Yesenia's blog post about it.
Posted by Tracy "Tito" Lynn MacLauchlan at 6:56 PM 2 comments:

Tracy "Tito" Lynn MacLauchlan
I am an animator with a niche in "tradigital" and cut-out style flash/digital animation and a love for drawing and character art. I create heartfelt e-cards and greetings illustrations for my job at Hallmark Cards by day and work on my animated series project, The Taffetas, by night.

"Tito" is my nickname among close friends and family.